This is a legacy article from 2015

A few years ago, shortly after moving from Windows to Mac (no regrets!) I discovered an amazing app called 'CodeKit'. This wonderful app runs tasks which are things we UI developers have to do on a regular basis.

To me, this program was a miracle and has saved me countless hours over the last few years. Until recently I was very happy with Codekit and had no real desire to look at anything else.

I moved to London. Suddenly everyone is asking me if I know how to use Grunt.js!

As far as I can tell, grunt.js does the same thing, except it's more fiddly to use and all of the settings are codified so they can be committed to source control (which is of questionable value - sometimes it's a great thing, sometimes it can be a terrible thing).

Now apparently even Grunt.js is yesterdays news, Gulp is the new kid on the block and has apparently impressed everyone so much that they don't really care about grunt anymore. I must admit, having had a play with both, I find Gulp a lot more appealing than Grunt but still not as clean and simple as Codekit.

Is it all worth it?

The problem with living on the cutting edge is that it's easy to be taken in by a 'fad'. These fly-by-night coding practices and cool new tools which people find often don't stand the test of time and learning them is just a waste of effort as something new will rear it's head in a few months and all that time you spent working with the new shiny things was time you could have spent developing stronger core skills.

Even Google Trends doesn't really hold much stock in Grunt OR Gulp, it seems a lot more people care about Codekit! 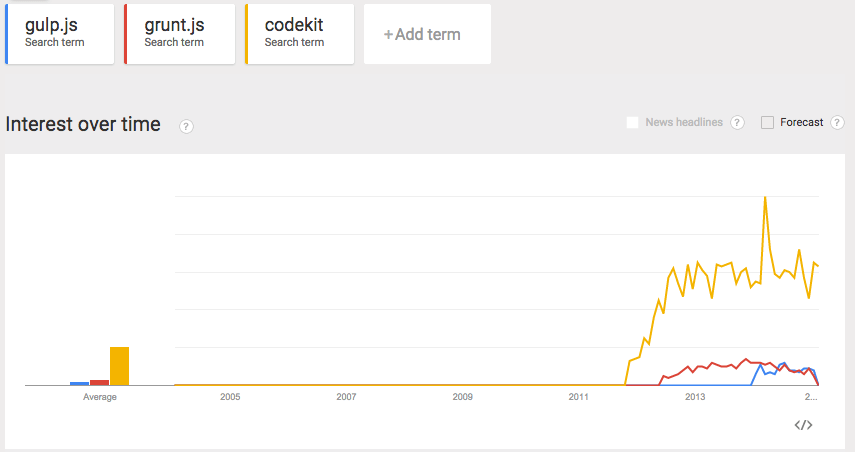 If I'm being honest, Codekit will remain my tool of choice. I think for the sake of 'fitting in' at the hip London agencies, I'm going to run a project in Gulp just to make sure I understand the nuts and bolts of it but with each release, Codekit just gets better and better, whereas the other tools seem to just fade into obscurity.

Are you a big fan of one of the above tools? I'd love to hear your opinion on the matter in the comments!