This is a legacy article from 2014

Anyone who says a dog is a man’s best friend never met Puddles. She was the most unique cat I've ever had the pleasure to know. Sadly last night she finally succumbed to her heart condition and had to be put to sleep. I miss her terribly and nobody will ever replace her. Let me tell you a bit about her. 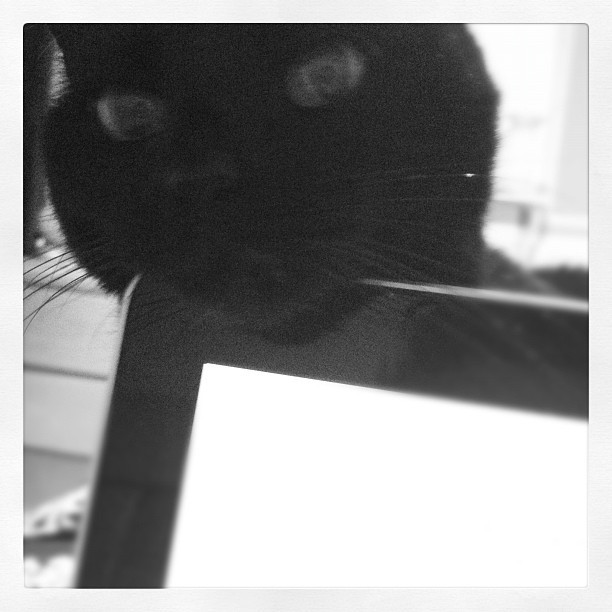 Back in 2000 I had a job I hated and I was just starting to suffer with depression. I was not a very happy man, one night when I went to put the bins out; I saw a tiny little cat sat under one of the plastic chairs in my backyard. It was chucking it down and she seemed quite frightened. I had to go to work so I put a tarpaulin over the chair to make her a shelter and gave her some tuna. When I came back, she was still there; I told myself that if she were still there in the morning, I would let her inside.

Sure enough, she was, so I picked her up – she was visibly terrified but did nothing violent – and brought her inside.  Her fur was matted with dirt and she had a pink collar on which had clearly been put on her when she was much younger as she had grown around it, taking it off seemed to hurt her a little and I could see that underneath it, her fur had worn away (she still had a line in her fur where the collar had scarred her).

I cleaned her up and gave her some more tuna and we've been best friends ever since.

At first she was incredibly timid, she spent 99% of her time hiding under my bed, after a while she'd come out a bit but only if I was around. Very slowly (probably about 3 years in total), she completely came out of her shell and started becoming a very sociable animal (except to other cats, whom she hated with a passion).

You could never meet a gentler creature, in the 14 years I had her, she never scratched anyone, not once. She didn't bite, she didn't hiss. She was just a happy, fluffy purr machine who was slightly addicted to the smell of bleach.

During the peak of my depression, I’d go as far as saying she saved my life, I knew that I couldn't do anything stupid as I couldn't leave her like that. She was always such a comfort to me whenever I needed her. We had our own little language (She would always respond to me, it was often like we were having a conversation) and our own little games. We always knew what the other one was thinking. The bond between us was incredible and I am devastated that I have lost that connection. I honestly feel like a part of me has died with her.

Eventually in 2013, I moved in with my girlfriend, Colette who Puds fell in love with immediately, whilst she does warm to people quickly, she isn’t very good at accepting new people into her home on a permanent basis but she never minded at all with Colette. It was only a few months later that she was diagnosed with Hypertrophic cardiomyopathy which basically meant that the inside of her heart was shrinking and it had to beat faster and faster to keep her alive. We were told she had between 3 and 12 months to live (She managed almost 14).

Mercifully she was practically symptom-free. She would occasionally cough and got out of breath once or twice but apart from that, she was as happy and contented as she had always been. In fact I suspect she was happier as we made sure that she was constantly spoiled in the last year of her life. We let her eat anything she wanted, we made sure she always had her favourite foods around her (tuna, prawns, chicken, custard, cottage cheese). We spent a lot of time with her (contracting allows me to be home during the day so she got more 'daddy-time' in the last year than she'd ever had).  She was scared of being outside alone but absolutely loved it when one of us was around. So long as she could see us, she'd be happy so we took her to a field last summer for a run around, I don't think I've ever seen her look more bouncy.

Last night, we went to bed after giving her some food (she still seemed as happy as usual), sat there for no more than 10-15 minutes when we heard a noise coming from downstairs, sometimes she gets scared at her coughs so I like to go down and cuddle her till she is calm, when I got downstairs I saw her lying still at the base of our sofa, she was clearly struggling to breath and appeared to have lost the use of her legs, occasionally she would arch her back and let out the most heartbreaking howl you have ever heard. Even now we don’t know if she was in pain or if she was just terrified that she was unable to move.

We took her to the vets who informed us that sadly it seems, she had had the cat version of a heart attack and that there wasn't anything they could do and brought us through to say goodbye.

She had calmed down a bit and although she was still quite subdued and clearly still couldn't move her legs, she was aware we were there and seemed happy to see us. We gave her a big stroke and kissed her goodnight, and then she was put to sleep.

It’s hard to really get across how amazing she was, I have never known another cat like her and I don't think I ever will since. I didn't lose a pet last night, I lost the most important living thing in the world to me, she was my little girl and my best friend and I am hurting more than I ever thought possible.

I know the vast majority of you who read this, won’t give a damn and probably never even made it to this paragraph. Don't worry though, I didn't really write this for you. I wrote it for me. I miss my little kitten and I want her back more than anything. My house feels empty now; there is nobody to greet us when we wake up in the morning or to tell us off for staying out too long when we come home. Our glasses of water will remain un-drank and our food untouched by a naughty little bugger who thought anything that was edible was for her and that thought fills me with more grief than anything else has ever done in my life.

Sweet dreams my lovely Puds, I will miss you terribly. I wish more than anything that you were still here with me.